Automatic dialling modes allow to significantly increase the efficiency of sales, debt collection or survey activities. However, the right choice of dialling mode for the given campaign is the key to success.

Automatic dialling, in the simplest terms, is saving the agent’s time when compared to manual dialling of consecutive digits by the agent. Instead, the call is initiated by clicking the given number on the computer screen or automatically after the time predetermined by the system. Automatic dialling requires a computer database of phone numbers.

The dialling modes differ when it comes to:

The difference is in the effectiveness of modes depending on the complexity of the campaign and the industry. 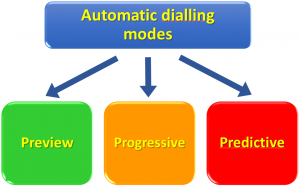 The system displays the following record from the database to the agent. The agent decides whether to call the indicated customer or to go to the next record and how long (or short) to familiarize themselves with the displayed information on this customer and prepare for the conversation.

When the agent is ready, he/she clicks the phone number on the computer screen. He/she waits when the number is dialled and manually ends the call in the case of voicemail, missed call or busy number.

The agent cannot skip a phone number and does not decide at which point to start calling – the time to familiarize themselves with the customer data is predetermined in the system by the administrator and, after its expiration, the next number is called.

Just like in the preview mode, the agent himself/herself manually ends missed calls, calls to voice mail or busy numbers.

The mode in which the system learns the pace of work and the availability of individual agents and, on this basis, it determines when to dial out another phone number. Agents do not have the possibility to decide which numbers and when to call. Dialling occurs when one of the agents will probably be available, that is, even during the previous conversation. Missed calls, calls to voice mail, answering machines or busy numbers are automatically filtered out by the system and only calls answered by customers are directed to agents.

Predictive dialling allows to INCREASE PRODUCTIVITY OF AGENTS EVEN BY SEVERAL DOZEN PERCENT, thanks to the elimination of the initial dialling period from the agents’ work time, that is a period in which waiting for the call takes place, and when there are calls to voice mails, answering machines or busy numbers. Agents are involved exclusively in conversations and their summaries.

In the case of unsuccessful attempts to call, the system automatically establishes a new time of contact using the contact information on the times of the day at which the rate of call answering is high. Users can specify in the system the number of unsuccessful attempts to make a call – if such are made and there is no conversation with the customer, the record is automatically closed.

Thanks to artificial intelligence algorithms, the system itself determines the optimal frequency of dialling on specified days and times, and the dates of dialling the missed numbers again. The system “learns” the trends based on two types of statistics: 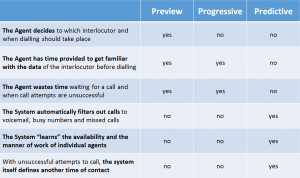 You will read about the methods of selecting the dial mode for the campaign in our next post.